16th July marks the anniversary of the death of Anne Askew, the last martyr to be executed under the reign of Henry VIII, one of the first English women to ask for a divorce and the only woman on record to have been tortured in the Tower of London… Oh, and one of history’s biggest bad asses.

Anne was born into a noble family, in Lincolnshire in 1520. Her Dad, William Askew, was a prominent courtier and landowner and pals with Henry VIII, whilst her two brothers were the Sherriff of Lincoln, and Henry’s cup bearer (which sounds like a shit job but was actually considered an honour, mostly because the Tudor courtier were the biggest bunch of brown-nosers in history, and fought to get close to the King, so much so that wiping the Kings fat, shitty arse was considered one of the highest positions a man could hold. Can you imagine telling your friends that is your job nowadays??

Anne was very well read and witty, and a devout protestant. The shit all started when Anne was fifteen and her sister, Martha, died.  So as to ‘save money’, Anne’s father arranged for Anne to marry the man her sister had been betrothed to, a local landowner, a vile scumbag called Thomas Kyme. Kyme was a strict catholic and didn’t approve of Anne’s protestant faith. He obviously though he could change her ways, but soon came to realise that he had bitten off more than he could chew when Anne refused to take his name and refused to refer to him as her husband.

In my opinion, Anne was the ultimate Tudor feminist, giving not one toss about society’s expectations of women of that time. Anne’s marriage was unhappy and abusive, and despite having two children with Kyme, Anne used the introduction of the reformation as a way to seek a divorce from her cock-wiff husband. Kyme grew tired of Anne’s belligerence and, under the advice of the local priest, and much to Anne’s pleasure, he kicked her out. Anne, being the indomitable rebel that she was, saw this as an opportunity to head down to London and spread the word according to the protestant bible.

Because he was a massive scrotum-faced fuckwit, in 1543 Henry VIII ruled that it would be illegal for all women and men of minor gentry and lower to read the bible. This was a bit to take back some control and hopefully forge some sort of relationship with the Holy Roman Empire. It was therefore seen as heresy to be somebody who would stand in towns reciting the bible for the ordinary folks who may not ordinarily have access to such texts, or a gospeller as they were named. For Anne there was no other way. She had been attending bible meetings in London, where groups would get together in secret to study the protestant text, and this was the next step for her. The people of London wanted to hear it and she felt duty bound to deliver it.

Anne was an amazing gospeller. The people flocked to hear her recite the protestant texts, and were enamoured that a noble woman of such high ranking would come to the streets to give the poor, uneducated and bible-less povvers faith and inspiration; plus she was easy on the eye, which I’m sure helped. She soon earned the name the ‘Fair Gospeler’ and became somewhat of a Tudor celebrity. Anne knew she was breaking the law but gave zero fucks about all that noise.

At one point she was arrested and her divorce request rejected, she was sent back Lincolnshire and imprisoned but escaped and returned to London to continue her good work. This is when the shit really hit the fan.

One of Henry VIII’s most trusted politicians, the militant Catholic Bishop of Winchester, was a snidey little gobshite called Stephen Gardiner. Gardiner didn’t take kindly to Anne Askew educating the poor with the protestant text and went out of his way to put an end to it by putting an end to her. At this point in time, Henry VIII was onto his last wife Katherine Parr, a beautiful, well-educated and very tolerant woman who also happened to be a devout protestant and a bit of a free thinker. Gardiner didn’t like the queen and so decided that there may be a way to kill two birds with one stone.

Stephen Gardiner and his massive bollock of a face.

Anne was good pals with a high ranking noble woman called Catherine Brandon, the Duchess of Suffolk. Catherine Brandon was also the queens BFF so Gardiner, seeing a connection decided that was his way in. He had Anne arrested and sent to the Tower, then he had the Queen and her ladies arrested under suspicion of heresy. Katherine Parr, being the brain box that she was, had the foresight to burn all of her protestant literature prior to the arrest when she got a wiff of Gardiners plans.

Whilst Anne was imprisoned in the Tower of London she was asked to name all of the women that she knew who heretics were. Anne said nothing. Ordinarily what would happen next would be that the prisoner would be shown a man undergoing torture on the rack, with the threat of ‘this will be you if you don’t comply’, but because Anne was a woman, and one of high birth at that, it was deemed inappropriate for her to see a naked man, so instead, and with rather questionable moral benchmarks, Gardiner decided that the middle man should just be cut out and Anne would go straight to the rack in an attempt to get her to name her conspirators.

Anne was eventually condemned to be executed by burning, but Gardiner still needed Anne to implicate the Queen. Now, as I hope you are now seeing, Anne was nobody’s mug, and being the heroine that she was decided to write accounts of her time in the tower. According these these accounts Anne was stripped down to her shift, tied to the rack and stretched until she was taught and raised five inches from the table. She passed out from the pain, but was revived and the whole process was repeated twice more. The Tower constable, a man named Anthony Kingston, could not bear to see the torture and ran to the King to demand it be stopped.

The problem was that the two men who ordered the torture were Gardiner’s right hand men. These two utter fucking wankstains were named Tom Wriothesley and Richard Rich (which in hindsight is probably why they were angry men). Rich and Wriothesley ignored the gaolers request to end the torture of Anne and instead took hold of the reigns and decided that if the torturer wouldn’t do it, that they would simply do it themselves. The violence only ended when Anthony Kingston returned from Henry with a royal demand to get Anne off the rack and leave her the fuck alone until her execution. As I have already said, Anne was the only woman ever recorded to have been tortured in the Tower, and still she didn’t name one other person as an accomplice. What an absolutely amazing lady she was. The Queen and her ladies were released due to a lack of evidence, and also because of Anne’s silence.

On 16th July, 1546 Anne was put to death by being burnt at the stake, the standard, yet friggin horrific death reserved for heretics and martyrs. The problem was the Anne had been tortured so much that she couldn’t stand. She had been stretched on the rack until her tendons had snapped, her wrists, ankles, elbows, hips and knees had all dislocated and her muscle fibres stretched to beyond repair. These vile bastards had really gone to town on her to the point where Anne had to be carried to the stake on a chair. She was then tied with chains to a separate chair which was attached to the woodpile, which was then set alight. As if this wasn’t enough, the fire was set to burn slowly, ensuring that Anne endured as much pain in her last moments as the men could cause. 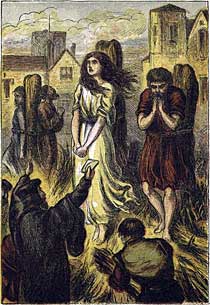 The martyrdom of Anne Askew

It is thought that somebody who took pity on Anne, covered her in gunpowder to ensure a swift end, other accounts suggest that the fire burnt for over an hour and people flocked to see the burning of the Fair Gospeler. One thing is consistent though, and that is that Anne maintained her dignity and courage until the very end.

At the time of Anne’s execution, a motherfucker of a thunderstorm rolled into London. It was believed that this was a display of Gods wrath at the murder of innocents. I like to think of Gardiner, Rich and Wriothesley sat there shitting themselves, cry-wanking into a pulpit begging for forgiveness at the sound of weather, but I doubt they did.

It is unknown whether Anne and the Queen were in the secret protestant club that Gardiner had invented, or if they even ever met at all. One thing is for certain though, Anne Askew’s story is one of the saddest yet most empowering in Tudor history, so much so that in Victorian times interest in her peaked and a special ‘Anne Askew doll’ was created, (which came complete with a rack and stake… real talk). Apparently one can still be seen today in Leeds toy museum… though quite why you would want to make a special trip to see a vintage murder doll is beyond me.

Anne was the last martyr to die under the reign of Henry VIII. She was only 25 when she died.