A few weeks ago I decided to go and visit Kenilworth to do a bit of research for a write up. It’s been on my hit list for a while and, let’s be honest, if a big fuck-off castle doesn’t help me find my motivation for writing Tudorials again, then nothing will.

The original grounds for Kenilworth were built in the early 1100’s by King John, and then later modified and extended by other historical legends such as John of Gaunt and Henry V. In fact, Kenilworth is apparently where Henry V was when Charles VI of France sent him a box of tennis balls, suggesting him such a child that he might prefer to stay at home and play tennis, and leave war to real men… Needless to say, Henry battered the shit out of him.

…and the beautiful view from the top

Originally, the surrounding grounds had been flooded, creating a large mere which not only provided a strong defensive structure, but it also gave the castle’s inhabitants generous hunting grounds. It’s hard to believe this when you visit now, as the land around Kenilworth is green as far as the eye can see -which is miles and miles; the views alone are worth visiting the castle for.

All this is reason enough to visit Kenilworth, but to put the final cherry on the top of an already amazing cake, in 1563 Elizabeth I gave the castle to her bestie, Robert Dudley. Dudley wasted no time in proceeding to pimp the living shit out of it in an attempt that she might choose him to marry, or drop her knickers for him at least.

Elizabeth had many reasons to grant Dudley such a magnificent, and historically important property. Firstly, Dudley was her beloved childhood friend and favourite, and having been through so much together, (such as both finding themselves in the tower during the downfall of Jane Grey, and Dudley’s brother, Guildford), Elizabeth possibly wanted to celebrate their rise in fortune. Secondly, the castle held significance for Dudley and his family as it had previously, yet very briefly, belonged to his father, that right honourable prick, John Dudley, Duke of Northumberland. However the castle had been passed back to the crown after Northumberland had married his son, Guildford, to the nine day queen, Jane Grey, and tried to control the crown himself, like the greedy shitehawk he was. 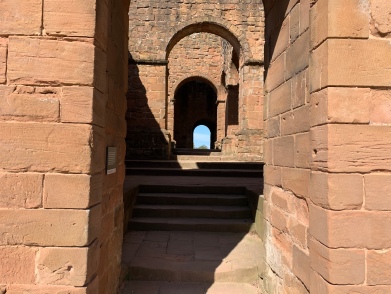 The windows in the Norman keep. Apparently they were large to let light in…

…and to show off the garden in true Italian aristocrat style.

Anyway, back to Robert Dudley and Kenilworth. Upon being granted the castle, Dudley wasted no time in continuing the improvements his father had already started. In the summer of 1575, when Elizabeth came to visit Dudley at Kenilworth, he pulled out all the stops. He had a new tower added to the castle in an attempt to wow the queen. The tower comprised of private chambers and must have been impressive as Elizabeth spent 19 days there, the longest period she ever spent at any of her courtier’s houses.

Dudley’s gatehouse is still in tact.

Dudley’s fireplace, dripping with sycophantic bullshit. The inscription on the fireplace translates to ‘Just and Loyal’…the fucking loser.

Upon her arrival, it’s said that Dudley had ensured the castle was draped with symbolism, in a vain attempt to woo the Queen and profess his love to her, in hope that she might marry him. He hired musicians to sing ballads of love and marriage at the Queen, masques, bear baiting, hunting expeditions into the Warwickshire countryside. There were even fireworks. Dudley was so hell-bent on expressing his love for the Queen that he commissioned two life-size portraits of them both to hang on the walls of the palace and paid a fool to jump out of a bush as she left, singing a cheesy as frig song about how she should just stay and marry him – subtlety clearly not being his strong point. He spent a fucking bomb on trying to get laid, and though impressive, it didn’t work because Elizabeth never caved, (this might be something to do with his wife’s suspicious death, but that’s a story for another page).

The bed in the gatehouse. Apparently the only bed in Warwickshire that Elizabeth never slept in. Not sure if the insinuation is that Liz was bit easy (more than likely gossip spread by the Catholics), or just a dig at Dudley and his futile efforts to knob her.

Upon Dudley’s death in 1588, the castle passed firstly to Dudley’s brother and then to his illegitimate son, also rather originally named Robert Dudley. In 1611, he sold it to James I son, Henry, Prince of Wales. After that, the castle changed hands several time, passing between royalty and nobles, becoming nothing more than a tourist attracting in the 18th and 19th centuries. Now you can visit courtesy of English Heritage, and I suggest you do because even in ruins, the castle is bursting with stories of past heroes, villains and lovers.

If you’re interested, you can read about the Duke of Northumberland’s downfall here, and if you’re curious about the dodgy death of Dudley’s wife you can read that here.