Katherine Howard: The rose among thorns

Of all of the Tudor queens, it is Katherine Howard that I have the most empathy for.  It seems her whole life, albeit a very short one, was filled with predatory men taking advantage of her circumstances. At a young age, she was forced to go and live with her step-grandmother – Katherine’s father had fallen into debt, and had to do a bunk out of the country before his debtors caught up with him. So she was sent to the Dowager Duchess of Norfolk, who, if I’m honest, was utterly shit and apparently well out of her depth at taking care of the young women in her protection.

In my professional* opinion, Katherine had significant attachment issues because of this, which rendered her vulnerable and extremely likely to accept the attention of anybody willing to give it; queue the gross, rapey, sex-pest-esque, Tudor fuckwits, who preyed upon young girls to get their thrills…men like Henry if were being entirely honest. As you can probably see already – I am on Katherine’s side in all of this!

It was in the Dowager Duchess’s care that Katherine had her first sexual encounters; one of which would testify against her, and the other would face his death as consequence. However, this blog is about Katherine’s execution, not the gobshites who caused it, so I shall put a link to a page about them at the bottom of this piece if you are interested in knowing about their part in it all.

Katherine was only 17 when she was stripped of her title as Queen, and sent to the block. She was executed because she had been seduced by yet another little buttmunch, Henry’s Privy Council pal, Thomas Culpepper. Thomas was seemingly yet another self-entitled piece off work, who managed to talk his way into Katherine’s knickers when the King was out of town. Though if certain history books are to be believed, it was Katherine that did the seducing.

The affair was aided by Katherine’s lady-in-waiting, Lady Rochford, who helped Thomas and Katherine to meet in secret and get their rocks off. Not content with simply being aware of the affair, but actively encouraging and supporting it, Lady Rochford implemented herself in the treasonous act. When Henry found out the affair, the intimate details of Katherine’s sexual past were investigated and all the unfortunate misgivings of her past were aired out like knickers on a clothesline. He immediately set to work summoning Katherine’s past conquests and gathering evidence against his young bride.

Katherine was defenceless. She had all but been caught red-handed and the evidence was overwhelming. Both she and Lady Rochford were sentenced to death. Henry, despite being a massive pig-dog of a man, was smitten with Katherine and her betrayal hit him hard. Henry had entered the marriage believing that Katherine would be the bride that his previous wives had not. Despite being 49, partially lame and riddled with cock-rot, Henry’s hyper-inflated ego meant that he thought he was irresistible to all women, even the 16 year old Katherine. There was no way his new Queen would look elsewhere right? I mean, what girl in their right mind would look elsewhere when they have to put up with an obese, stinky dad-man, with a pustulous leg and breath like a dead hookers minge, gyrating his syphilitic ramrod against her kirtle?!  I mean, the very idea of such a catch has me wiping my chair as I write… oh wait, no. No it doesn’t, and Henry was both naive and arrogant to think that Katherine would find him to be the man of her dreams, regardless of his status. 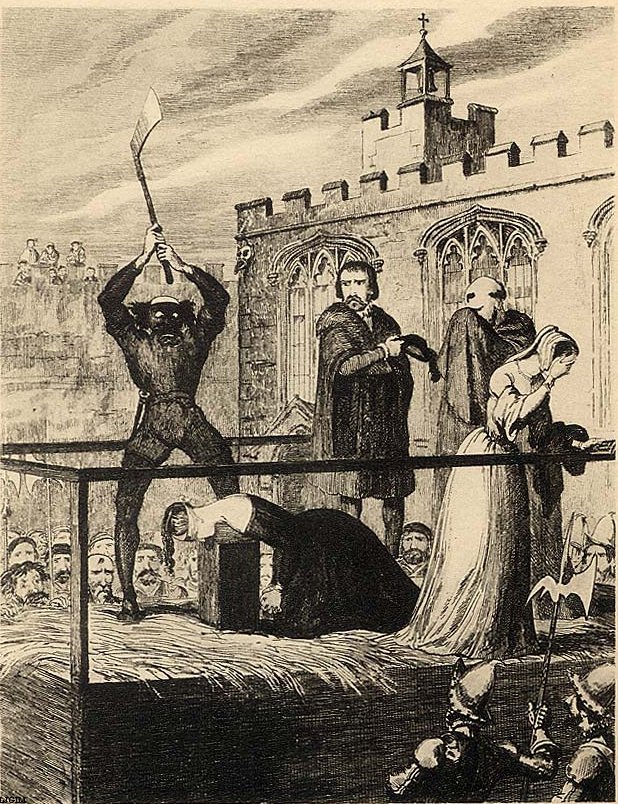 The execution of Katherine Howard

The main sticking point for Henry was that he thought Katherine was a virgin when he married her. He had undoubtedly also boasted to his privy boy-gang about deflowering her, and felt like a knobhead when he found this to not be true. In fact, Katherine had been with a couple of men prior to Henry, to one of which she had promised herself to be his wife. This was a man called Francis Dereham. When Henry learned about her relationship with Dereham, a man now in employment at the royal palace, he went fucking mental and ordered that Dereham, along with Culpepper, be sentenced to a traitor’s death. Culpepper was able to talk his way out of such a fate, but Dereham was not so lucky. Nor was Katherine or Lady Rochford.

On the night on 12th February, 1542 Katherine awaited her execution. Being a Sunday, it was postponed until the next morning. The extra day’s wait must have been agonising for the young girl. Katherine spent her last evening preparing for her death by practicing placing her head on the block so she didn’t fuck it up the following day. At 7am the following morning, dressed in a black velvet gown and weak from emotion, she was escorted to Tower green: the very place her cousin, Anne Boylen, had met her fate at the hands of Henry just less than five years earlier. She was accompanied by Lady Rochford.

After mustering the courage to address the crowd, she placed her head on the block and was executed with one swift blow of the axe. Lady Rochford followed, kneeling in the blood of her former Queen as she too was beheaded. Their bodies were taken to St. Peter-ad-Vincula within the grounds of the Tower, and covered in Quicklime. Interestingly enough, during renovations of the church in Victorian times, the bodies of the women were never uncovered, although they do say her ghost haunts the halls of Hampton Court.

So there it is, the sad tale of Henry’s ‘Rose without a thorn’. May her ghost shit on the heads of all who sailed in her. If you are interested in the executions of Francis Dereham and Thomas Culpepper, you may like this Tudorial here.

*I feel that I am allowed to say ‘in my professional opinion’ as I work with young people with such issues and recognise the pattern…plus it’s a no-brainer…plus it’s my blog so that surely makes me qualified *ahem*!