On 27th May, in 1541 Margaret Pole, niece of Richard III and Edward IV, was executed at the command of Henry VIII. You may not of heard of Margaret Pole so I will fill you in because her death was quite brutal and makes an interesting read, (if you like the darker side of the Tudors).

Here is where it gets complicated. Margaret was daughter of the Duke of Clarence which made her niece to Richard III and Edward IV. She was a Plantagenet by birth, (so instantly posed threat to the Tudor throne), and cousin to Elizabeth of York (Henry VIII’s Mum). confusing isn’t it?!

Anyway, being a Plantagenet meant that Margaret obviously had the power to stir up a massive shit storm for he Tudors, so when Henry VII came to power he married her off to his cousin, Richard pole. They had 5 kids together but when Rich died he left her nothing, literally fuck all so Margaret turned to court for help.

Henry VII paid for his funeral and put Margaret back onto the Market. By now her kids were growing and one of her sons, Reginald, was sent to the church as thanks (he later became the archbishop of Canterbury no less…boy done good).

All was sweet for a while, she remarried and became stupid rich (inheriting the title Countess of Salisbury and owning lands in her own right). When Henry VII died and his lad Henry VIII inherited the throne, Margaret pole was in favour, she was Catherine of Aragon’s best pal, godmother to the princess Mary (later known as Bloody Mary when she went on her killing spree), and had never posed a threat as a Plantagenet.

But! Like all good things in the Tudor world, it came to an end. During Henry’s proposed divorce to Catherine of Aragon, Margaret son Reginald (the church baby who grew up), started flapping his trap about the King. He wrote pamphlets suggesting Henry was somewhat of a bellend for crossing the church and denounced his policies as king. I’m sure you have heard of Henry VIII and what a massive git he was, so I’m also sure you can imagine how utterly unimpressed he was with the whole thing.

Anyway, Reginald Pole then fuked off to France and remained under protection of the pope , (who shared the opinion that Henry was somewhat of a knob for throwing the word ‘divorce’ around as head of a catholic country). So Henry, not being able to touch Reggie, obviously Henry went after his family, which included the frail old Margaret Pole.

Anyway, to cut a long story short, Margaret was arrested and taken to the tower and charged with treason in 1539. Being a strong woman in the last of the Plantagenet line, I think Henry would’ve jumped at the opportunity of binning her off, so he waited and waited keeping her and some of her family, under lock and key in the tower.  Two and a half years later in 1541, Margaret was taken to the block. She was a decrepit 67 year old, but being of noble birth was granted a ‘private execution’ (just the 150 or so gawpers as opposed to all of London).

She protested her innocence and refused to kneel at the block so was forced down. As the executioner struck his blow she struggled and he missed and hacked at her shoulders. Its then said that she made a break for it and it took 10 swings of the axe to kill her. Her son, Reginald didn’t really care for his mother, she did abandon him with the church after all (obviously not realising that it would bite her on the arse in later life). He returned to England when the Catholic Mary Tudor stormed onto the throne an became Archbishop of Canterbury. So good for him eh?!

After she died a poem was found carved into the walls of the tower:

For traitors on the block should die;
I am no traitor, no, not I!
My faithfulness stands fast and so,
Towards the block I shall not go!
Nor make one step, as you shall see;
Christ in Thy mercy, save Thou me!

if you look closely on this protrait if Margaret, you will see a little barrel pendant on her wrist. she wore this as a nod to her Dad, George of Clarence, who was executed for treason by his brother Edward IV, by being drown in a barrel of malmsey wine…his choice of execution method. he was a bit of a nobber so dont feel too bad, i just think the barrel is a nice touch! 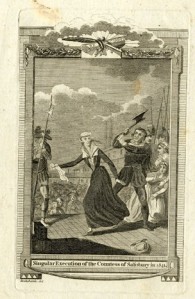