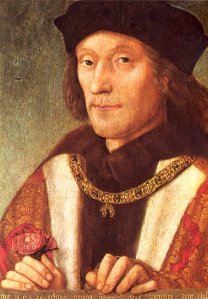 Henry VII: Looking as smug as he should do

Henry VII was crowned king on 30th October, 1484, after kicking the shit out of his predecessor, Richard III, a few weeks earlier at the battle of Bosworth (which you can read about here).  Now let’s not be under any pretence: Henry had about as much claim to the English throne as Richard did, actually less of a claim, and there were many people who would see the throne return back to the York’s if they had their way. Henry was nobody’s fool though and did everything within his power to make sure that this didn’t happen. Actually this is more of a story about a very clever man, than the coronation of a King.

As you probably already know, Henry married Elizabeth of York, the daughter of Edward IV and niece of Richard III. This was an attempt to unite the houses of Lancaster and York in order to seal his claim to the throne and suggest that the recent wars and battles were over. Although the pair were betrothed, henry didn’t marry Liz until the following January (nearly 3 months after his coronation). This was to ensure nobody could claim that henry only had the throne through his wife’s claim TO IT. He managed to delay the marriage by writing to the Pope to ask for special permission for the marriage to happen – the couple were distant relatives, though that didn’t usually stop folks back then. Henry knew however that it would take fucking ages for the letter to get to the Pope and for a reply to be sent, buying him a bit of time to squeeze his coronation in.

His next genius move was to set the date of his assentation to the throne to the day before the battle of Bosworth so that he could claim anybody supporting Richard was a traitor and seize their lands. By seizing their lands he was not only showing them that they really shouldn’t fuck with him, but also making himself incredibly wealthy in the process. I think the whole wealth thing would’ve come as a bit of an alien concept to Henry. He had been so used to moving around and living in relative poverty in France, (I say ‘poverty’…he was poorer than his birth right would suggest, don’t feel too bad for him, he wasn’t a council estate in Tory Britain type of poor, more of a Kate Middleton after forgetting her purse kind of poor), then suddenly he finds himself rich with a whole army, a treasury and a shit tonne of land to his name.

Henry also learned from Bosworth that nobody could be trusted, (his step Dad had given him the run around at Bosworth and a few of the other noble men had shown themselves to be a bunch of fickle dick heads). Henry’s answer to this problem was to make a law that no man should have his own army. This stopped anybody rising up against the King and reduced the power the noblemen had. Henry wasn’t thick.

His next act of pure genius was to be crowned before the first meeting of parliament, so that nobody could argue the legitimacy of his claim to the throne. After all who is going to tell the King that he is not king? Especially if that King has just seen to it that the last man who pissed him off has an axe put through his head and his knob and bollock paraded about on the back of a horse for all to see before being shoved under a future car park?!

His actual coronation itself took place at Westminster Abbey. It must have been an emotional day for not only Henry, but for his Mum, Margaret Beaufort. Margaret had not seen her boy for 17 years. She had Henry when she was 13 and childbirth near killed her. She never had another child, and despite being scary as balls, I think she loved him very much. She sent him into exile for his own protection: being an heir to the throne of the house Lancaster at a time when the throne was occupied by the York family was pretty dangerous, (think Montague and Capulet if you need a perspective), and had Margaret not sent henry away he would’ve almost certainly been killed as a child.

Of course, Henry’s ‘unofficial’ coronation took place on Bosworth battle field, when Lord Stanley dragged Richard III’s crown out from under a bush and placed it upon Henry head. Henry knew that he had to have a proper coronation, one that ‘was under the eyes of God’ (i.e. in a church and not on Gods actual face), in order to cross it off the ‘reasons to kick henry off the throne’ list. By holding a coronation at Westminster Abbey and presenting his standards at St. Pauls cathedral, Henry was saying to the world ‘Look God chose me so I must be King…I’ve put my flag up and everything’. It worked. A couple of years late and nobody even questioned henry’s claim (well, apart from the pesky Lambert Simnel and Perkin Warbeck posse’s that is, but that’s a story for another Tudorial). 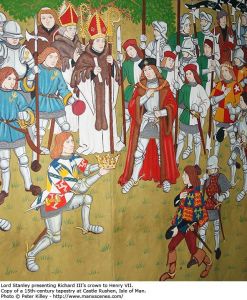 Henrys ‘unofficial’ coronation at Bosworth. Apparently this picture is based upon a tapestry, and not a crap colouring in book bought from a National Trust property.

Henry went on to reign for 23 years, 7 months and 28 days. His reign brought about peace to what had been a really shit past few decades, and also marks the birth of the Tudor reign. Henry always strikes me as an amazing bloke and the more I read about him, the more he becomes a contender for the ‘my favourite Tudor Sovereign’ spot.