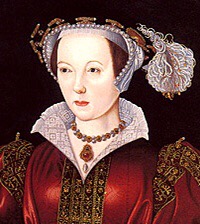 On this day in 1548, Catherine Parr died after contracting ‘childbed fever’, (scepticemia caused by shit, inexperienced midwives who had been reserved for the wealthy instead of actually delivering babies and working out what the fuck they were meant to be doing). She was Henry VIII’s last wife and pretty cool, so here are my 5 fave Cath facts:
1. Catherine wasn’t a fan of the idea of marrying Henry, (let’s face it by the time he had got to her, he was a vile, bitter old bastard, and she had been shoved into two marriages prior to him; the last being to a proper Grandad). She had the hots for Thomas Seymour, who was Jane Seymour’s (Henry’s 3rd wife), brother. She married Tom in what some called an indecent amount of time after Henry’s death, (Good girl is what I say).

2.Catherine’s mum, Maud, was Katherine of Aragon’s lady in waiting. Maud called her baby after the queen, so Herny’s last wife is named after his first… Which is fucking grim.

3. Catherine was the best step mum in history (probably). Catherine nagged Henry into bringing his kids back to court, and ultimately back into his favour. She took on Elizabeth’s welfare when Herny died and saw the best education. She moved her into her home at Sudley (away from court), and encouraged her to follow the Protestant faith, (she also sent her away from the house to protect her from her rapey, mental as balls husband when she found out he’d been sniffing around young Liz, which must’ve broke her heart). Without Catherine, Elizabeth I wouldn’t have been the fab queen, and strong woman that she was.

4. Katherine was a known follower of the reformed faith, which pissed off loads of the moany old codgers at court. She was known to have a stash of banned books, which she had inevitably read and shared with her ladies. This was a crime punishable by death and some of the members of the privy council, in particular a sly cockweasle called Gardiner, wanted to see her gone, so drew up a warrant for her arrest.

To cut a long story short, Catherime caught wind of the plan to arrest her. Some people think the warrant was ‘dropped’ and one of her ladies found it and told her about it, others say that she was so well loved that an insider told her, whatever happened it was a bloody good job it did. The queen was so distraught she became ill (or maybe faked it), and the king came to visit her. Not letting on that she knew of the arrest warrant, she let Henry talk to her about religion and listened as he tried to trap her into saying something incriminating.

Katherine was far too clever for Henry, and simply said that she could not have an opinion about religion without him, because his opinion was the greatest. Like the egomaniac he was, he believed that she actually thought he was the leading authority on religion and went back to being her BFF, but like a complete bell end forgot to tell his guards, so when they came the next day to arrest Catherine, instead of putting them straight, he battered them (yet again another illustration of what a tool he was).

5. Catherine was a bit of a boffin and published her own books about religion, (much to Henry’s dismay). Upon Henry’s death, she published a book called ‘Lamentations of a Sinner’, in which it became obvious she had been a strong believer in the Protestant faith all along. Well played lady.

So there you are, a whistle stop guide to my fave Catherine facts.