It was January 31st, 1547 and the King, Henry VIII, had been dead for 3 days. It was now time to tell the world, and announce the new Sovereign; King Edward VI…What a shit storm this caused. 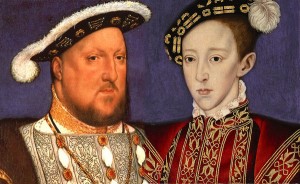 Shortly before he died,even when it was obvious he was about to croak it, nobody had dared tell Henry VIII that he was on his way out. To do so would be treason, and nobody really fancied being remembered as the idiot who sent himself to the gallows. Instead, the privy council secretly making preparations – and by this I mean making power grabs for anything and everything they could get their vulture-like talons into, like a shower of cunts.

Henry’s only son and heir was about to inherit the throne, but he was only 9 and therefore vulnerable to manipulation by the Kings ‘finest’ men. Henry was on it though; prevent his one and only son becoming a puppet to the greedy bastards at court, he set up a privy council of 16 of his most trusted pals to act as governors to the young King until he came of age – which was a long way off, lets be honest. 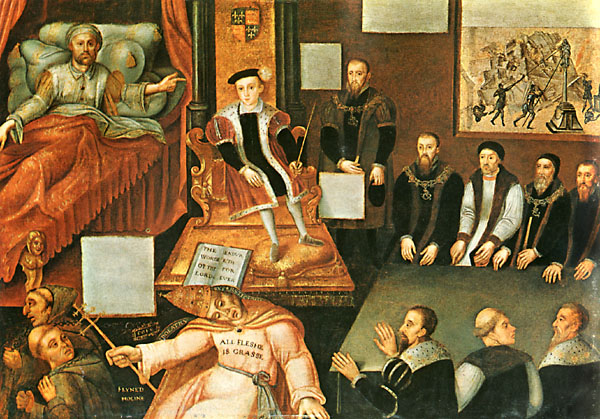 Henry’s deathbed: The young prince is sat next to the dying king whilst a member of the Klan looks on, (not really, its Thomas Cranmer)

It didn’t really work though; the men all had different religious and political views, and all were desperate for power. One of the main problems was that Henry’s will seemed to have been poorly thought out, and titles and lands had been handed out to peers like biscuits at your Nan’s house. This had whipped up the already over-ambitious council members into a state, and it was now apparent they needed some sort of leader. Henry had not foreseen this, and had neglected to name someone to lead of the pack of pricks he had chosen, and so something had to be done.

The council reluctantly agreed that they were incapable of aiding a small child without tearing each others faces off, and decided to appoint a leader. On 4th February the council had a vote and decided the job would be best suited to the new Kings Uncle, Edward Seymour, 1st Duke of Somerset. I say  “had a vote”  but what more likely happened is that Somerset bought the men’s votes, and brokered deals to buy  power; he had after all just inherited a fuck-tonne of land from Henry’s will so had the cash to gamble with…the sneaky shit. 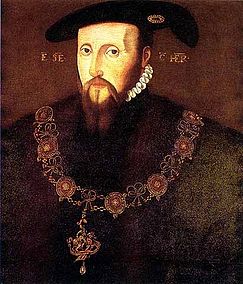 To Somerset, becoming the Lord Protector of the Realm was the ultimate prize.It meant that he could effectively rule England for the next eight or so years, puppeteering the new King until he came of age. On paper, Somerset probably was the best placed to do the job; After all he was the King’s Uncle, a war hero, extremely wealthy AND  a staunch protestant, just like the young King himself. Obviously he accepted the position graciously.

There is much I could write about Somerset, and indeed his brother Tomas, who was also somewhat of a cunt, but this thread is about Henry’s succession, so you will have to take my word when I tell you that he was a massive dick-end. Needless to say met a sticky end. In 1549 he tried to abduct the King, in a fashion, and was removed from power. He was later executed in 1552 for being a massive twat (it did not say this on the execution papers – it said ‘Treason’ – but everyone knew the real reason).

What of the new king? If tales are to be believed, King Edward was a nasty little shit. Wrapped up in cotton wool and spoiled rotten,  he grew to emulate his fathers tyranny. Some even think that had he had survived his adolescence he would’ve been worse – can you fucking imagine that shit?. He apparently once ripped the head off his pet falcon because he had been scolded in the school room. He did keep the protestant faith, but was a sickly little weasel and died young, at only fifteen years old; just over a year after his Uncle’s execution, and the only time TB has ever been welcomed.

Knowing he was dying, and not wanting the country to return to Catholicism (as it would if the throne passed to his eldest surviving sibling, Mary), Edward named his cousin, Jane Grey, his successor – using the excuse that  Mary  had been declared a bastard, therefore removing her and his other sister Elizabeth from the line of succession. This went tits up too, but that too is a story for another time…

If you do fancy reading about Thomas Seymour you can check this snippet out: Tom and the Spaniel. And what of the Lady Jane Grey? Well you can read a bit about that unfortunate business here: Lady Jane marries a proper dick

482 years ago today, in 1533, Anne Boleyn was crowned the Queen of England. She was Henry VIII’s 2nd wife and lasted a mere 3 years (almost exactly to the day), before he lopped her head off through sheer boredom (and a sprinkle of politics).

Henry spent a shit ton of cash on her coronation as a desperate attempt to win around the public’s enthusiasm. They hated Anne. She had turned the whole religion of the country around, caused monasteries to be burned and had somehow enticed the king away from the much loved Catherine of Aragon (who he had been married to for freaking ages and had stood by him through thick and thin, organised his wars and kept his country running smoothly when he had buggered off to scrap about in France).

Anne and Henry had undergone a secret wedding a little before the coronation. I think this would’ve been a bit of a snub to the public as it was no secret that they disapproved of the union, so for Henry to then marry Anne was like a massive fuck you to the people, little did they know that she was also preggers with their daughter Elizabeth, (later Queen Liz I, ultimate hardcore virgin  feminist), at the time. Because of the pregnancy, Henry would’ve wanted to marry Anne asap in order to have a heir to the throne s opposed to another bastard (I like to think of Henry as a Robert Baratheon type figure since he had a few bastard kids kicking about being the dirty shagger he was).

Anyway, back to the coronation… I could write all day about the riches and elaborate decorations but I wont, just think big. Think  grand flags and bunting, hundreds of boats following the Queens golden barge down the Thames, cannon fire meeting the royal couple (who had a bloody barge each), cloth’s of gold (yes gold…as in real gold), foot soldiers and the finest attires. 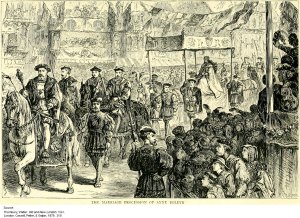 Knowing Henry’s choice of replacement queen was unpopular, he made her coronation more expensive and much more elaborate than her predecessor’s, as if by way to win the public’s affection. However this blew up in his face somewhat when Anne was reportedly met by mocking laughter, insults and booing. sad times for poor Anne.

In her coronation the archbishop declares that Anne is ‘Set above all others and witnessed by God Himself thus only death could remove her’. Oh how wrong could one man be?! 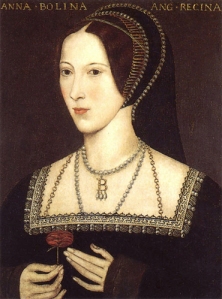 Anne Boleyn: possibly the most famous and most formidable of Henry VIII’s wives, even though her marriage (and reign), only lasted 3 years.