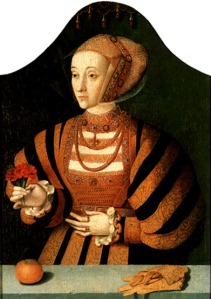 I know I’ve wrote about Anne of Cleeves before but today is the 458th anniversary of her death. She died on 16th July 1557 (possibly of cancer), aged 41. She outlived Henry VIII and all of the other wives, and went on to live a fantastic, luxurious lifestyle as the ultimate single lady upon the finalisation of her divorce.

Anne of Cleeves had been suggested as a wife to Henry by Thomas Cromwell and pals (He was Henry’s fave lawyer and well renowned for getting him out of the shit with Anne Boleyn amongst other things). Henry didn’t really like her and was a complete knob to her. To cut the story down, it basically went like this:  when they first met he dressed as a tramp and ‘surprised’ her at court and them took offense when she looked disgusted, he then couldn’t get a stiffy on their wedding night and so this somehow became her fault and she was labelled ‘a flanders Mare’ for all the court to take the piss out of. Not only that but Henry has his eye on Katherine Howard, her young 17 year old Lady in waiting, so he wanted rid of his new wife ASAP. Their marriage only lasted 7 months and Anne only survived because she went without fuss. Henry paid Anne a boat load of cash and gave her a shit load of houses and awarded her with the title of ‘Kings sister’ making her the most powerful and well respected woman in the country aside from the queen and princesses (who had both been declared bastards by this point). Anne embraced this new found sense of freedom knowing she had a lucky escape. She started signing letters ‘Daughter of Cleeves’ and not ‘The Queen’ and did everything she was told by the King. It must have been terrifying for Anne to come so close to pissing Henry off.

After their divorce Anne was paid a massive annuity, more than likely to keep her quiet. She lived well and was always welcome back to court. During his marriage to Katherine of Howard, Henry invited Anne to court; this must’ve given him some sort of sick kick surely? Anne went and it was all lovely. This went on for some time, even after Katherine Howard’s death and long into his last marriage to Katherine Parr. Henry would visit her frequently and the two would have all kinds of fun. By now Anne had become slightly more British, by this I mean she had let her strict piousness lax a little and now enjoyed a gamble and a booze up (welcome to England eh). She was minted. She loved her servants and was a fab boss, and they loved her. The whole of this period she remained close to the kings daughters (princesses) Elizabeth and particularly Mary who was only a year younger than herself. She even bought a pet parrot. Things were good. 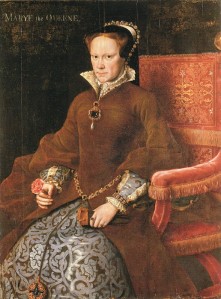 Upon henrys death, his son Edward took over the throne as a mere young wipper snapper at the age of 9. Now Anne was no longer the Kings sister (now she was his aunt), so her importance, and with it her annuity, dropped and Anne quickly found herself in debt. Edward had also suggested that Anne should marry his Uncle Thomas Seymour, but she wasn’t keen and Tom was already secretly plotting to marry Katherine Parr, Henrys 6th wife and Edwards step mum…nice and incestuous like.  The King was fairly good to her though, but it didn’t matter anyway because in 1553 he died.

Upon his death there was the whole business with Lady Jane Grey inheriting the throne and being kicked off by Mary I. Anne loved this. Mary had been her step daughter and more importantly her Bessie. Anne found herself back in royal favour. She even ditched her strict protestant faith in favour for ‘the old religion’ of Catholicism, as Mary had requested. Anne took centrepiece next to the new Queen and her sister Elizabeth at Mary’s coronation to show the world how ace she was.

Upon her death, Mary ordered that she would have a grand funeral ‘fit for her status’. She was carried on a massive hearse through London to Westminster Abbey. She lay in state for just over two weeks and was draped in the finest funeral attire. Her funeral was conducted under Catholic rites, as Anne had wanted, (though let’s be honest this was possibly an action devised to keep Mary on side…nobody wanted to piss that bitch off!). She was the only one of henrys wives to be honoured with a burial at the Abby.

Anne is by far the luckiest of henrys wives. She not only profited from him, but survived him, outlived him and prospered from him. Getting that divorce was the best thing she ever did.