19th May 1536: Henry VIII’s second wife, Anne Boleyn lost her head (as in had it hacked off with a sword at the command if her ‘loving’ husband as opposed misplaced it). After turning the political and religious beliefs of the whole country upside down in order to marry Anne, after a few short years he wanted rid to make room for another, ( being the nice bloke he was).

Anne was initially told she would be executed on the 18th at 9am. She waited and waited and nobody came. She was eager to die, i think because on the whole being alive do Anne was utter shit and heaven awaited her. At he last mass and confession she maintained her innocence. This was evidence enough for most subjects that Anne was innocent, to swear it before death must mean its true or how else would God accept you!? She became anxious that she had not been executed before noon as promised, she also joked that the executioner would have an easy job as she had a little neck. Finally, dressed in black, (the colour of death), and red (the colour of martyrdom- like shoving the rods up at Henry), she headed for the scaffold. The executioner had been summoned from France. Anne had requested to die by a highly skilled french swordsman as opposed to the usual fat arsed English axeman. It’s said that as her head fell her lips continued to move. She paid £20 arms to the poor at the time if her death, (given to her by Henry) and was remembered as ‘the late queen’. This is particularly interesting as Katherine of Aragon and Katherine Howard (the two other crowned queens who met particular shorty ends at the hand of their fat head husband), lost their title and recognition as queen straight away. 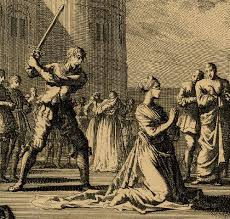 Though Anne is not my favourite queen she is one if the most interesting and her death had a large impact on many people. Henry, being the romantic that he was, was betrothed to Jane Seymour the following day and married by the em if the month. What a dick he was