Today is the 463rd wedding anniversary of lady Jane Grey and Guilford Dudley. The pair were palmed off and forced to marry in 1553 by their parents, (as many were back then), in order to seek a strong claim to the throne upon the death of Edward VI. Jane was NOT happy with the arrangement; Guilford and his power hungry family were dickheads and out for their own gain, and Jane didn’t want to be queen at all, she wanted to read and prey and certainly not marry.

Guilford was a massive tosser who did little but drink and whore, whereas Jane was a refined gentle character who would have been happy in a nunnery with her books. Their marriage was a mere political convenience.

The absolute cockweasle that is Guilford Dudley

It came about because Jane’s mother, Francis, was next in line to the throne when Henry VIII’s only son, Edward, was king. Francis was Henry VIII’s niece, and since his two other children, (Elizabeth and Mary), had been declared bastard, she was his next kin by blood. She was a cunt too. She was an utter botch to Jane, and manipulated her through cruelty and neglect. She decided that if she could forfeit her claim to the throne (after all she had no sons so there was very little point of her inheriting the crown), it would pass to Jane and Francis and John Dudley (1st Duke of Northumberland and Guilford’s Dad), could essentially rule through their children.

Since the king was young and sickly, and Northumberland was his chief counsellor, (therefore already the most powerful man in the country), he was in prime place to notice when your Edward was past his sell by. He moved quick to get to work putting his son in the throne and secure his power, and block out Mary and Elizabeth’s claim for good (well that was the plan).

The pair were married on 25th May. The marriage was so rushed that Jane had to borrow a gown from the Royal wardrobe. Edward died in July of the same year, naming Jane as his heir (she was the same religion as him, as was his sister Elizabeth, but Edward knew that by reinstating Elizabeth’s claim to the throne would mean that the crown fell to his catholic sister, Mary. Edward did not like Catholics so left the crown to his cousin Jane). All was falling in line for Jane and Guilford’s parents.

The marriage was short and most likely unhappy, (there is little evidence to suggest otherwise but a stack to suggest there was no love lost between the two). The couple were married in the May and by the November both were dead.

Mary came after just 9 days of Janes reign and took the throne with an army of supporters. She was after all said and done Henry VIII’s first child, and bastard or not the people would rather have seen the morally correct thing being done, than see some cheeky little bastards steal the throne… even if that ‘morally right’ thing was Mary.

Mary arrested all concerned, and promised to be forgiving to Jane as she knew none of this was her doing. In the end, what actually happened was that Francis was pardoned and Northumberland and Guilford executed at Tower Hill. It looked as though Jane would get her pardon, but since she refused to convert to the catholic faith, Mary had Janes body relived of its head. The night before their execution, Guilford asked to meet his wife for a final time. Jane refused saying it would be too distressing and they should wait to meet in heaven. I like to think she had her final revenge on Guilford, blowing him out in style and leaving him snivelling in the tower like a snot faced idiot with donated pride.

Some historians think that Mary would’ve executed Jane anyway, despite her promise of keeping Jane safe. Marys new soon-to-ben husband, Phillip of Spain, was a strong supported of the Catholic faith and wanted to see jane dead, partly because she was of the reformed faith, partly to send a message not to fuck with the Queen, but mostly because he was an utter bastard. Mary was smitten with this tit faced Pillock and desired nothing more than to marry him, so if doing away with jane was the answer then this is what she would do. Some think Mary wanted her to convert so her soul would be saved in the afterlife. Whatever the reason, Jane was so brave and headstrong that she refused to repent and was executed at the tower.

I love the tragic story of Jane Grey and Guilford Dudley. No matter what you think of Guilford, both children, (because essentially that’s what they were: Guilford was 19 and poor Jane only 17), were horrifically manipulated by their greedy parents, with dire consequences. 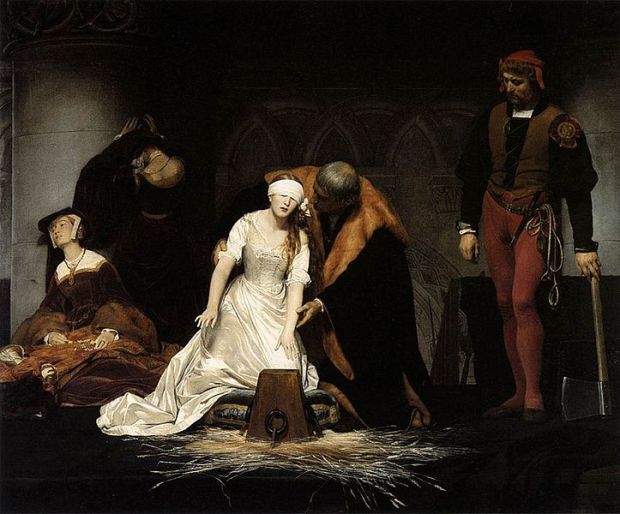 Out of all the images that depict Tudor life and events, this is my absolute favorite. It is the execution of Jane grey painted by Paul Delaroche.