On 17th April 1534, The kings right hand man, Thomas More, was sent to the Tower of London to await a trial for charges of treason. More was one of henry VIII’s best chancellor and lawyers, and at one time the two were super pally, but More had over stepped the mark by refusing to give into the King and go against his own better judgement. More, being a strict catholic man, had refused to acknowledge Henry as the head of the church, and as far as henry was concerned this meant that More was proving to be a right pain in the royal hoop.

The trouble all came about when Henry decided that he wanted to divorce his wife of nearly 24 years, in order to bend his member up his fancy piece, Anne Boylen. The Pope was all like ‘ Hell no boy, that ain’t happening, Us Catholics don’t do divorce, or maybe you missed the scroll’. Henry was not in the slightest bit happy bout this so decided to sack off the Pope and make himself the head of the church in England. As you can imagine, this caused a bit of tension and people were pissed off at the idea that their king, who was previously kept in line only by the Pope, was now taking the liberty to make himself even more important and powerful by moving the moral goal posts and putting himself in charge of that aspect of English law too. So, like a spoilt little shit, Henry sought the council of his closest pals to go about binning off the Pope.

More wasn’t having any of Henry’s bullshit. He was Catholic like everyone else at that time, and like everyone else he too recognised that the Pope was the boss…not Henry. What gave Henry the right to make himself the head of a new church? How could Henry be so arrogant to assume that he is the best person for that job anyway? How did he have the nerve to piss off Rome in such a spectacular way that the whole country would suffer and Catholicism would be shaken to its very core? All because the King could’t keep his dick in his pants. Fuck. That. Noise. More wasn’t buying into that shit at all. So, like the predictable, overindulged twat that Henry was, he had More arrested for treason.

Henry was worried that More’s resistance to the idea of him running his own religion illuminated the fact that the Parliament were sceptical of it too, and if parliament had doubts that they dare to voice, then the public wouldn’t be on board either, putting a spanner in the works for Henry’s knobbing. More had to go. Henry found him guilty or treason and sentenced him to death.

Thomas More’s decapitation at Tower Hill and a rather pleased executioner. Obviously not a fan of the Catholics.

On 6th July, 1535 More was beheaded at Tower Hill. To be fair he got off lightly: the standard form of execution of traitors was to be hung, drawn and quartered, but since Henry and Thomas were once friends, Henry thought he would be kind and lessen the punishment. What a kind ‘friend’ he was. Henry didn’t really want to kill More, he pushed and pushed for more to retract his statement and recognise Henry as the new gaffer, but More wasn’t budging. He was a moral man and knew that there was NO WAY Henry was entitled to  govern the church and break from Rome. More told Henry where to go, he told Henry’s men that he believed  that ‘no temporal man should be the head of spirituality’, (which is a confusing sentence from a man who heavily supported the Pope…another temporal man at one time).

So there we are, another one of Henry’s friends murdered so that the King could get his way. You have to admire Thomas More for committing to his beliefs and having the bravery to tell such a spoilt king to shove his Oath of Supremacy up his arse. The sad thing is that after More’s death Henry soon grew bored of Anne Boylen too, (who suffered the same fate as More).

Thomas more’s head was spiked and placed on London Bridge. It was there for a month or so, rotting away, until it was decided that it would be thrown into the Thames to make space for the heads of other traitors to the crown. Mores daughter, Margaret Roper, decided that she did not want to see her fathers rancid, decaying face sink to the bottom of the murky water so bribed one of the guards to pass it to her and brought it home to save as a relic. It is now presumed to be locked in the Roper family vault at St Dunstan’s church,  Canterbury. 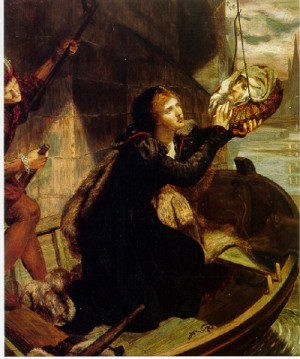 More’s daughter rescuing her Dad’s head from the spikes at London Bridge. There are better things to inherit.