On 3rd April , 1546, the massive killjoy that was Henry VIII, (with massive being used in both a literal and metaphorical context here), decided that the brothels of Southwark had to go.

Southwark lies south of the city of London and the only way to access London from the south, (or indeed to leave), was by crossing London bridge into the borough. Because Southwark was at arms reach from the city, and a passing point for tourism, it became an almighty shit hole where all walks of life, rich or poor, young or old, went to get their kicks. It was a hovel of entertainment, rife with prostitution, bear and bull baiting and illegal acting houses (yes that was a real thing). Syphilis was fucking everywhere and the stew houses (which is just about the best name ever used to describe brothels), were full of blistered whores with boils in their bits and blokes who were willing to pay a pretty penny to get in on that action. Henry needed to stop the spread of Syphilis, clean up Southwarks image and create the illusion that Tudor London was a place of morals and not whoring and hypocrisy. 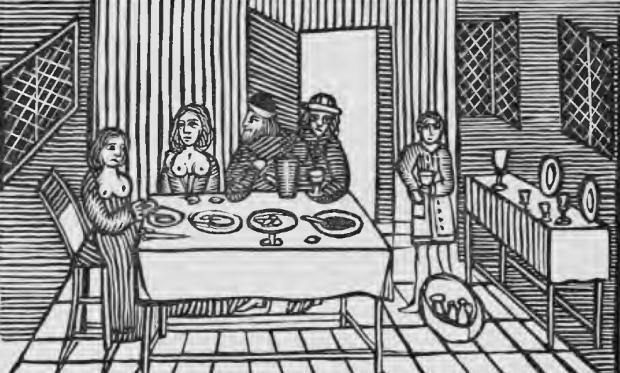 ‘A good old traditional Southwark brothel, where we have tea with our tits out and everyone looks over the moon to be here…oh and we also collect crockery’

Now there are a few interesting points to be made here: the first being that this was not the first attempt to clean up Soutwark. Henry VIII’s dad, Henry VII, had tried to shut down the stew houses fifty or so years prior to this attempt. He had demanded the women who worked in such establishments were to leave, and if they were foreign that they should take their scabby fannys back to where they came from. The women simply left Southwark for the outskirts of London, spread a bit of love their and moved back into Southwark when Henry VII had forgotten about them. Some people referred to the spread of syphilis out of Southwark as ‘the wind of Winchester’, this was because the brothels in Southwark fell under the protection of the bishop of Winchester, who taxed them and made a mint, subsequently the women who worked there became known as ‘the Winchester geese’. 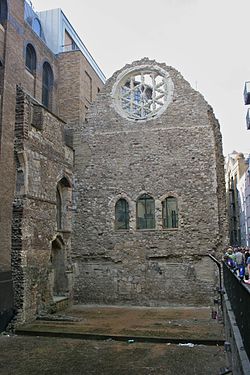 The second point to make is that both Henry VII and Henry VIII were both giant whoring cunts, who used women as a commodity and shat all over them once they had finished. Henry VII was a frequent visitor to the ‘geese’, and Henry VIII was the most immoral man in the real, but syphilis wasn’t going away fast so things had to be done.

The closure of the stew houses in 1546 was accompanied by a ban on bear and bull baiting too, which pissed off a lot of people who liked nothing more than a good old family day out seeing animals rip other animals apart. these events gave the poor an opportunity to mingle with the rich (and possibly pick a few pockets and hustle a few punters). It wasn’t even Henry VIII’s first attempt at cleaning the streets. In 1533 he introduced ‘The Buggery Act’, which saw anybody committing any sexually deviant act (not just buggery), would be punished under the charges of treason and sentenced to death (without religious rights or burial). What I love about this is that one of the buggery Acts victims was Henry’s second wife, Anne Boleyn, who was accused of shagging her brother and being somewhat of a flusie. Another victim on record is a noble woman who apparently fucked an ape and had a mutant baby, so was sentenced to death, (which is particularly horrific as this just reflects the Tudor view on deformities and the baby was probably killed too, though there is no record of this). The buggery act wasn’t really aimed at homosexuality, (though this was punishable under the law) , but at anybody partaking in a bit of bum fun or caught shagging their livestock. the act was only revoked by parliament in 1861. 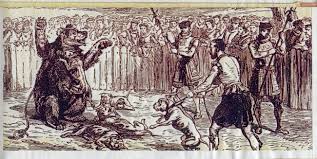 I’m pretty sure the bear in this depiction is only smiling because he appears to have a puppy rubbing his belly. I’m not sure this is a true likeness of bear baiting at all.

Anyway, back to the stew houses… Under the new reforms it was easier for Henry to clamp down on prostitution, the church (now Henry), owned all of the brothels anyway. Of course it continued unlicensed, women had to eat, but now just got a little more dangerous, both for the women and their clients. Upon the death of Henry, the still illegal trade flourished as mentioned, but Edward VI reintroduced bull baiting and bear baiting onto the South Bank,  (it is well documented that his sister, Elizabeth I, was a sucker for seeing a bear ripped to shit by a bunch of dogs also). However, the prostitution never really went away and parliament had to appeal to the king for purges on the illegal brothels. Nothing really worked and the women continued to work,  (as you will know if you have ever been to London and been offered ‘lady pleasure’ down a back alley, or even ‘up’ a back alley  since the buggery act was dropped).