Back in 1518, when tensions between European countries were high, and each nation was acting like a chief to the next, declaring wars and generally being cunts to their neighbours, Henry VIII’s right hand man, Cardinal Wolsey, hatched a plan.

The idea was to invite all of Europe’s great monarchs to London for a sort of less shit, medieval G8 summit, where they would all sign ‘the Treaty of London’. The treaty was an agreement that stated that all those who signed would maintain peace in Europe, and if a country decided to break the treaty, war would be declared upon them by the others. It all sounded good in principal, but took less than a year to go tits up.

It all kicked off when Francis I of France and The Holy Roman Emperor, Charles V of Spain had a spat. Spain and France were the most powerful countries in Europe at the time, so shitting themselves both sought to form an alliance with England, the third most powerful. Whilst Henry must have loved all this attention, he was in a bit of a tricky situation: He was married to a Spanish princess, and the Aunt of Charles V, Katherine of Aragon, meanwhile France lies next door and could cause a potential shit storm for Henry.

Henry decided to meet Francis to talk shit through and try to ‘strengthen relations’. I feel it is important to say at this point that Henry fucking hated Francis, Francis was arty, rich and handsome, and knocked around with the likes of Leonardo Da Vinci , whilst Henry was athletic, spoiled and egocentric. The pair had one thing in common though, they were both competitive as fuck.

The rather dashing Francis I of France, serving the painter come to bed eyes and a little coy smile.

They decided to meet at Balinghem, in the then English owned area of France known as the Pale of Calais. Henry took half the bloody country with him; he had around 5000 noble men and women, 3000 horses and a shit tonne of wine. Some of the noble’s had literally had to re-mortgage to be able to attend, but they wouldn’t have missed it for the world… to be fair would you? it was essentially front row tickets to see two kings make themselves look like right royal pricks (pun intended), in a display of self-provoked public humiliation. So off they all trotted, popcorn and front row tickets at the ready, off to France.

The whole event lasted nearly seventeen days, during which time each king tried to upstage and outshine the other. These cunts were so insistent on making the other look like a chump that they both nearly bankrupted their treasuries. Henry had a mock castle made to house him, which was draped in cloth made from real gold, (hence ‘the Field of the Cloth of Gold’). He had the finest, most expensive tapestries taken across, along with the most monumental feasts. There was dancing, jousting and archery tournaments and the whole thing became geared up to discover which country held the most wealth and power. It was less of a celebration of unity and more of a cock fight, (with Henry and Francis acting like big fucking cocks alright).

The whole thing ended in tears when Henry challenged Francis to a wrestling match. Henry, who was built like a brick shit house, was no stranger to wrestling and confidently thought he could take the weedy, art loving ‘Renaissance Prince’, Francis. He was wrong, and to put a long story short, Francis owned his arse. Some say that Francis tripped Henry and therefore only won by cheating, but these ‘some’ would be English, and I like to think that Henry got pwned by a nerd. 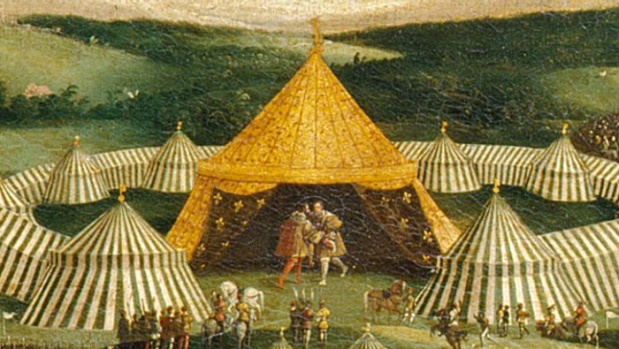 There is definitely no tripping to be seen in this instant replay still.

Henry, being the utter spoiled sore loser that he was, skulked off, and with that the Field of the Cloth of Gold was over. The whole event, which was designed to strengthen relations between the two nations, failed miserably. On his way home with his freshly bruised ego, Henry popped in to see Charles V and forged an alliance against France. Two years later England and Spain were at war with the French King and the Treaty of London went out of the window.

I love the story of the Field of the Cloth of Gold. It sounds like it should be a majestic and bromantic tale of two men finding peace, when actually its about a massive fucking mard arse with a big wallet having a pop at another massive fucking mard arse with a big wallet. I like to imagine that after the event Henry told Katherine, ‘you know what dear, I think as a way of showing my undying, eternal love to you, we will go and help out Charlie after all…’, and that’s why he decided to become allies with Spain. I’m pretty sure it was not because he was actually seething out pure venom from his sweat glands at the thought of a two stone when wet through, French as fuck hipster, kicking his hoop all over a posh field whilst his subjects look on… and then having to pay for the privilege as well. That would be childish.

Henry VIII and Charles V, The Holy Roman Emperor…probably planning a dish of smack down for Francis.

If you enjoyed this Tudorial, you may also like the Drunk Histories version of events told by Tiff Stevenson, which can be found here. Enjoy!

2 thoughts on “June 6th, 1520: The Field of Cloth of Gold, (a.k.a. Histories most expensive dick measuring contest).”