Anne Neville was born on 14th June, 1456 at Warwick Castle. Her family was one of the wealthiest in the country and her Dad, Richard of Warwick, was one of most important men in the War of the Roses, (and by far one of the biggest cock ends that has had the good fortune to be written about in history books). Because Anne’s family were so minted, they hired their own chronicler to record everything that happened to the family at that time, (well all of the good stuff), but despite this relatively little is known about Anne Neville. The chronicler was obviously shit.

It’s fair to say that if, like any normal person, Anne was to complain that her parents fucked her up, that she would have had a fair point. Anne belonged to the House of York and grew up at Warwick castle. A young Richard of Gloucester, (who grew up to be Richard III), had been sent there as a boy to learn how to be a badass from his cousin, Richard of Warwick, so the two children would’ve known each other reasonably well. However, yet again the wanky jobsworth chronicler failed to get anything good wrote down about this, and so we can only assume they were either indifferent to each other or any scandals were covered well, (I suspect it’s the former and I’m just letting the Phillipa Gregory in me run wild).But its true, the pair knew each other well and Richard of Warwick arranged to marry his daughter Isobel to Richards brother, George Duke of Clarence, (and both were younger brothers to King Edward IV, who I will introduce to you in a moment). However, all of their lives were overshadowed by the Wars of the Roses, and each of them played important roles in the shaping of the future.

In 1461, the wars were in full flow and there was a shit-tonne of scrapping happening, (which  to be honest is too giant to write about now without deflecting from the quite frankly amazing Anne). The King in Power belonged to the House Lancaster, and although essentially part of the same family, the York faction couldn’t stand them and wanted to take the throne for themselves. After much fighting and the death of the Duke of York (Edward, George and Richards Dad, and main contender for the York crown), the throne did change hands. With the help of Anne’s Dad, Richard of Warwick, who would later go on to be known as ‘Warwick the Kingmaker’.

The new King, Edward IV (the best King ever in my opinion), was mega grateful to Warwick and the house of York rose to power, much to the utter dismay of the Lancastrian supporters and, (to a lesser extent), their soft as shit King, Henry VI who didn’t really know what planet he was on. But the person this caused the greatest grudge with was Henry VI’s feisty as fuck wife, Margaret of Anjou. This woman was like a caged bear being poked, who then just happened to stumble upon the key and shit was about to get real!
So, the Lancastrians weren’t happy about being booted off the throne and the scraping continued until eventually Warwick decided that he was so pissed off with King Edward for not kissing his arse to the extent that he thought he deserved, that he made a plan with Margaret of Anjou to try to get Henry VI back on the throne, (bear in mind that Henry was a dribbling idiot, so would be ruled through Margaret and, of course, Warwick). This all went tits up and Henry VI was caught and imprisoned. Warwick took his family, (including Anne, Isobel and his son-in-law / brother to the King), and fled to France in exile like a little bitch, fearing, and quite rightly so, that Edward would execute him as a traitor.
As mentioned, Warwick had married off his eldest daughter, Isobel, to King Edwards brother George of Clarence, in some vain hope that George would inherit the English throne someday, making his daughter king. However, George had lost his place in the queue to the throne as Edward had rather inconsiderately had about a million legitimate children. Warwick decided that there was more than one way to skin a cat, or rather to get to the crown and the glory; in December 1470, he decided to marry his second daughter, Anne, to the young Lancastrian prince, Edward, Prince of Wales, the son of Margaret of Anjou and Henry VI. By doing this, Warwick had ensured that his daughter would be the future Lancastrian Queen of England, once the Lancastrian line had been placed back on the throne and his old pal Edward had been booted off. George was there to help and things looked bleak for the Yorkists…and poor Anne who was only 14 and had been used as a pawn in her fathers game.
Never fear though Tudorial readers because all was not lost. In May, 1471, feeling overconfident and as cocky as a chav on a joyride, the Lancastrians set off, with Anne and her new husband, Edward Prince of Wales, in tow, back to England to take back the English throne. It did not happen. George shat himself and ran back to Edward and the three York brothers went and kicked the absolute shit out of Margaret of Anjou’s forces at the battle of Tewksbury. The battle was so bad that the abbey had to be reconsecrated due to all of the blood spilled in it. Anne was widowed as her young husband, Edward, was executed (possibly at the hand of George of Clarence). Margaret of Anjou was arrested and Anne was taken into the custody of her sister, Isobel, and George. A few days later Henry VI was found dead in the tower, some people think that Richard was behind this.
Although things would seem to be looking up for Anne; she was now free and in the safe care of her sister, she got royally fucked over yet again. Her sister Isobel and her piece of shit husband George, were secretly plotting to rob Anne of her inheritance, which was substantial to say the least. In those days if  man married he automatically inherited his wife’s money, so George stood to become especially wealthy with the entire Neville bank account to his name.
Isobel and George had apparently planned to put Anne in a nunnery and had gone out of their way to prevent a marriage match to be made for her. Rumour has it that they dressed her as a maid to prevent her being rescued, but I think this is a load of old bollocks. Richard, Duke of Gloucester caught wind of his brother’s dickheadedness and swooped in like a regular hero to rescue Anne, (say what you like about Richard, but this is one good thing that he did do).
In spring, 1472 the pair wed, despite not having the special papal dispensation which was needed. Some people like the romanticism that surrounds this, and suggest that it proves the couple were truly in love, however lets just bear in mind that anyone who was to marry Anne would inherit a shit ton of cash, including Richard, and the last person Richard would want to have the money was his turncoat brother George.

Richard III and Queen Anne – not sure this is a true likeness. It was probably drawn by the chronicler. He was shit.

Anyway, time ticked on and all seemed to be settled for a short time. Anne and Richard appeared relatively happy and in 1473 had a son, also called Edward, after the King. George proved himself to be a traitor yet again, and was executed by King Edward and Richard (by being drowned in a barrel of wine like a jeb end). This meant that Richard moved closer to the throne, but still had to wait in line to Edwards two young sons.
In 1483, King Edward died and Richard was named Lord protector to the two princes and had them placed into the tower for their own ‘safety’, (I say ‘safety’ in inverted commas as they were both killed there, though that’s a story for another day). Prior to their death Richard had managed to get the princes declared illegitimate, shoving himself in direct line to inherit the throne, and that’s exactly what he did. Richard and Anne were crowned king and Queen of England on 6th July 1483.
Richard taking the throne had rocked a few boats and pissed a few people off, mainly Edward IV’s wife, Elizabeth  Woodville. She wanted Richard and Anne dead. Her boys had been murdered in the tower, Richard was in prime place as candidate to this and what’s more he had been making the eyes at Elizabeth’s daughter (his niece), who was also rather originally called Elizabeth. Anne had grown sickly and tired, and in 1484 her son Edward died aged 10. Anne was heartbroken and Richard was growing desperate. It is no secret that Richard had shagged about with numerous mistresses during his marriage to Anne, and had sired a few kids here and there, but it is believed that what he really wanted was his niece Elizabeth of York. Imagine how poor Anne must have felt, she must have heard the rumours that the two were lovers and having lost her only son I imagine she felt pretty shitty.
Anne’s health deteriorated and she became more and more sickly. Some people speculated that Richard was poisoning her to clear the war for the more fertile, and extraordinarily beautiful Elizabeth of York, whether this is true or not will never be known but I like to believe it’s not.
On 16th March, 1485, Anne Neville passed away aged 28. There was an eclipse the day of her death, most people took this as a sign of Richards downfall from grace. Richard openly grieved for Anne who was buried in Westminster in an unmarked tomb. In 1960, the Richard III Society placed a bronze tablet above her grave to finally give her the recognition she deserved.
So thats it, a whistlestop tour of the troubed life of Anne Neville. And what of Richard? Well you can read about what happened next here. 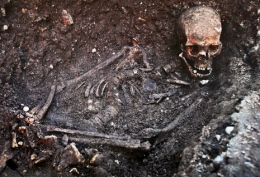